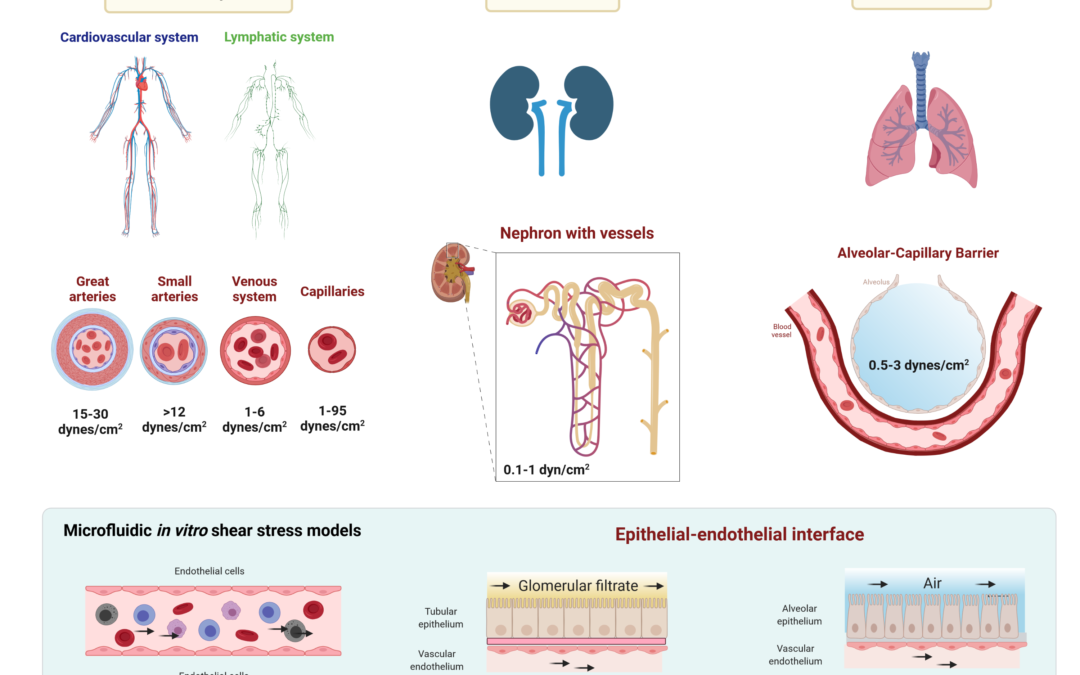 Wherever fluid is, shear stress will be too. In biology and vascular processes, fluids act on the cell surface. For instance, blood flow acts on the endothelium surface of vessels walls as a frictional force coined shear stress. This mechanical phenomenon has a great impact on tissue function and biological responses through mechanotransduction processes, modulating cell morphology, proliferation, differentiation, metabolism, communication and aiding in barrier formation.1 Then, what is exactly shear stress?

Shear stress (Ʈ) is defined as a mechanical force exerted when a tangential force (F) acts on a surface (area = A):

For a Newtonian fluid, with constant viscosity, the shear stress depends on the viscosity (ɳ) and the shear rate ( dv/dz)

Although shear stress unit in the IS system is Pascal (Pa), for cardiovascular system and biological applications shear stress is measured in dyne/cm2. Being 1 Pa = 10 dynes/cm2.

There are many cell types that are constantly subjected to fluid shear stress. Endothelial cells from vascular blood vessels and lymphatic system are exposed to circulating blood and lymph. Depending on the vessel type, shear stress may vary from 30 dynes/cm2 in arteries to 1 dyne/cm2 in venous vessels and capillaries.2 It has been reported that endothelial shear stress alters cytoskeletal organization, cell shape and gene expression, increasing intracellular calcium concentration, triggering nitric oxide production and producing changes in actin stress fiber formation, aligning and remodelling microfilament network in the direction of flow.3, 4

On the other hand, epithelial cells from different tissues are also exposed to shear stress forces. The kidney, in its filtering function through a sophisticated tubular network, is capable of filtrating 120 ml per minute, what means 180 L per day.5 So that the epithelial cells lining every nephron are exposed to the shear stress of glomerular filtrate, estimated between 0.1-1 dyne/cm2. Some studies have demonstrated that renal proximal tubule epithelial cells lead to cilia formation in the presence of shear stress. In addition, the mediated signal transduction is regulated, improving epithelial cytoarchitecture, leading to increased cell volume, greater polarization of aquaporins, cation transporters and ion channels than kidney epithelial cells in static culture.6

The blood vessels surrounding alveoli of the lung are continuously exposed to shear stress from blood flow. However, shear stress is also generated on the air side of the alveolar-capillary barrier. At every breath we take, epithelial cells lining our airways are exposed to shear stress generated by the air flow, which at rest breathing is 0.5-3 dynes/cm2. These forces have been demonstrated to modulate airway epithelial barrier function, mucous production and ciliary beating alignment.3,7

Also, in the human intestinal tract the flow of digesta induced by the peristaltic motion of the intestinal wall affects the enterocytes lining the digestive tube, which has been previously shown to be 0.002-0.08 dynes/cm2. Gut on a chip microdevices applying fluid flow and shear stress promote accelerated intestinal epithelial cell differentiation, formation of 3D villi-like structures, and increased intestinal barrier function, recapitulating many complex functions of the normal human intestine. 8

It seems clear that shear stress plays a key role in the function of tissues and organs. The microfluidic devices, unlike previous in vitro cell culture platforms, are considered a powerful tool that allows flow and shear stress control in situ. Hence, this technology increases the chances of developing reliable organ models for drug screening and toxicology testing.

This article has been written by Sandra González Lana.