In vitro cell culture platforms are essential for modern research, clinical studies, and drug development. For more than a century, the petri dish has been the corner stone of in vitro cell culture. The inventor of this technology, Julius Richard Petri, intended its use for the culture of microorganisms. However, time has proven it useful for a large variety of biological and biomedical applications. During over a century, these devices have been produced in a plethora of materials and formats and have supposed a groundbreaking breakthrough in biological research.

However, the unceasing scientific progress has shown that petri dishes do not fully reproduce the reality of in vivo organisms. In other words, to put it plainly, this technology fails to recreate the physiological environment of cells in vivo.

When culturing cells on a plastic or glass plate, we are ignoring many of the stimuli of the microenvironment of the cells in vivo, and that stimuli affects greatly how cells behave and express as they do in the human body. The Spanish philosopher Ortega y Gasset once said that “I am myself and my circumstances”. This is equally true for cell biology, “the cells are themselves and their microenvironment”. Failing to recreate it correctly, will be misrepresenting the behavior of cells in vivo in its entirety.

This train of thought has lead engineers and biologists all over the globe to start the development of a new generation of cell culture platforms that meet this unfulfilled need of recreating faithfully the microenvironment of the cells. The most promising candidate among these new cell culture platforms are microfluidic devices.

Microfluidics is the science that studies fluidic manipulation in the microscale by confining the fluidic flow in channels of dimensions in that scale (10-6-10-3m). These platforms applied to cell culture are known as “organ on chip” and allow the recreation of the mechanical, electrical, and chemical stimuli that cell undergo in vivo.

Beonchip (Biomimetic Environment On Chip) devoted to the design, development and commercialization of these platforms. Our multidisciplinary team that includes, biologists, engineers, and physicists, works daily to develop new cell culture platforms and models, that represent biological processes fully and show more reliable results than classical in vitro models. Our final goal is reducing the use of animal testing in drug development and toxicity testing by creating a new generation of in vitro platforms for drug development and the identification of new clinical biomarkers, therapies and speed the process of vaccine development up. In addition, the reduction of animal research in favor of in vitro studies will save time and cost to researchers and pharmaceutical companies in their R & D.

How does Organ on chip technology recreates the physiological environment of the human body?

Firstly, using microchannels and compartments in the fluidic path allows the organized deposition of materials and specific proteins simulating an extracellular matrix. This allows the cells to adhere and interact between them as they would in vivo. Then, the tissue under study is connected to a flow of media that resembles the blood flow traversing the capillary that irrigate a biological tissue. This flow causes mechanical stress on the tissue (shear stress) and this force has a direct impact in the cell expression and morphology. Moreover, the flow has an indirect impact due to the creation of oxygen and nutrient gradient that may cause phenomena such as cellular migration or differentiation. One of the greatest advantages of Organ on chip technology is the possibility of adding drugs, immune system cells, viruses, bacteria and even other microorganisms that help recreate the microbiome to the media that is perfused through chip. Thus, combining different cell types in an in vivo-like architecture and applying all the physical and chemical stimuli that a tissue undergoes, we can recreate a portion of an organ or a tissue building a functional unit.

These functional units can be interconnected to simulate the crosstalk of different organs in the body, and therefore, allowing the study of complex biochemical and physiological responses of this interconnected system. This concept is known as Body on Chip. It is worth mentioning an example of this technology developed by the researches of the Wyss Institute in the USA. They connected a gut-on-chip with a liver and kidney on chip to evaluate the effect of orally administrated nicotine. After absorption in the intestinal wall, the substance traves though the simulated circulatory systems and is delivered to the liver. There the nicotine is metabolized and finally it will arrive to the kidney where it is excreted [1].

In the long term this technology will be used in personalized medicine, extracting cells from a patient, and culturing them in a chip to replicate the patient’s disease in vitro. This replica of the patient will allow the physicians and biologists to test different drugs and treatments to observe which of the treatment suits each patient best.

Our goal in Beonchip is to grow with the organ on chip technology and reach all of the targets mentioned in this post, helping closely our customers to adopt the new generation of cell culture platforms with the aid  of our in house R & D team. Together we will continue working to develop these innovative platforms paving the way for a more efficient and ethical biomedical research landscape. 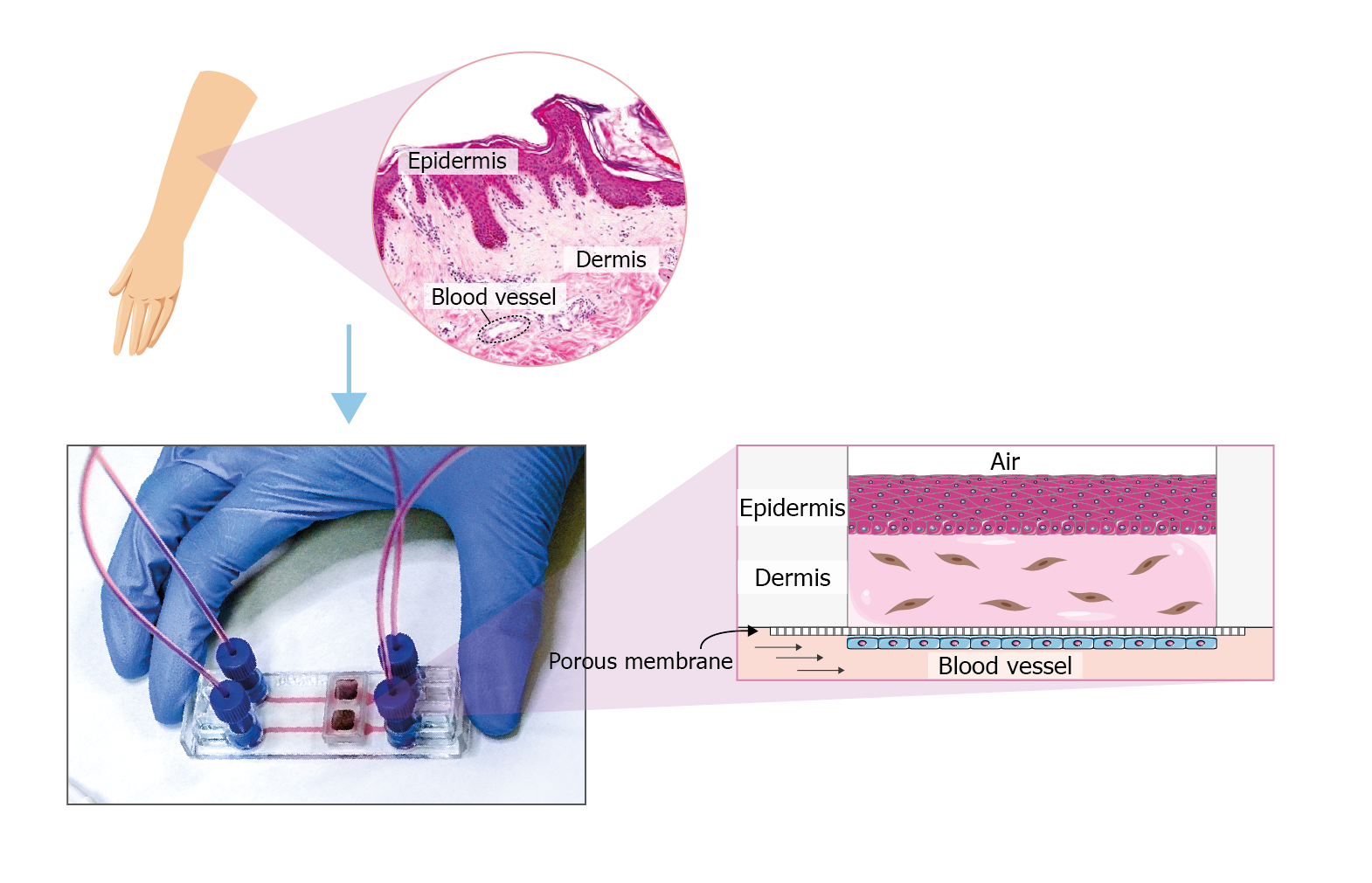 The figure shows an example of how to recreate a skin on chip model in the microfluidic device BE-Transflow (https://beonchip.com/product/be-transflow-standard-10-devices-per-box/). This device allows the study of complex culture configurations by joining a culture well with a microfluidic channel via a porous membrane. In this device, it is posible to recreate the blood vessel that irrigates the skin tissue, covering the membrane that separates the channel and well with endothelial cells. The dermis that is mainly composed of collagen and fibroblasts is simulated using a 3D culture of fibroblasts embedded in a hydrogel. After the polymerization of the hidrogel, we can culture a layer of keraynocytes in an air liquid interface. This culture conditions will favor the growth of the different strata of the epithermis.

This article has been written by Sandra Gonzalez Lana and Luis Serrano.