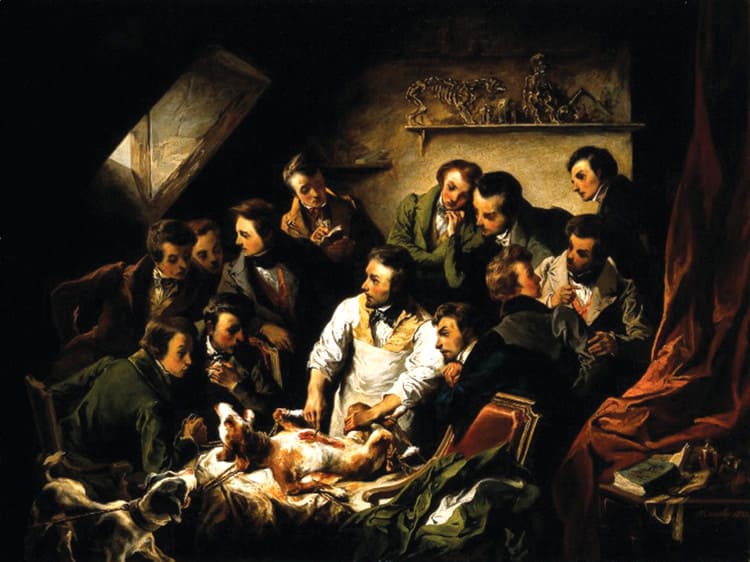 The use of animal models in scientific experimentation has always been around. In fact, the first known use of animals in scientific experimentation date from 500 B. C. in the ancient Greece. During that period, vivisections of animals were a normal practice to acquire knowledge on the mechanisms and functions of living organisms[1][2]. For centuries, animal experimentation has been the standard practice for learning medicine and biology, and it proved to give outstanding results in research, like the discovery of the circulatory system done by William Harvey (1578-1657) or the development of toxicity testing protocols based in animal experimentation started by Johan Wepfer (1620 – 1695).

Before the XVIII century, the notion of animal cruelty was inexistent in the philosophy and moral of the time. In fact, globally known philosophers such a as René Descartes (1596 – 1650) defended that, even though animals were capable of suffering, they cannot experiment emotions in a rational manner, thus their suffering was irrelevant if it served for the development of mankind. During the time, the most famous retractors of animal experimentation Jean Riolan, Jr (1580 – 1657) and Edmund O’Meara (1614 – 1681), believed that the torture that the animals undergo during vivisection and other experimental practices altered the results of the tests, invalidating them.

During the XVIII century, philosophers such as Kant (1724 – 1804) started pointing out that animal cruelty could lead to cruelty towards humans. Other philosophers such as Voltaire (1694 – 1778), Rousseau (1712 – 1778) or Schopenhauer (1788 – 1860) criticized the utilization of animals as means to an end. Later, several groups against vivisection were created around the globe, like the American Society for the Prevention of Cruelty to Animals (ASPCA) in the United States or the National Anti-Vivisection Society in the United Kingdom.

Even though these groups organized many protests during the centuries XIX and XX, their message didn´t get enough momentum until the publication of two books: “Animal liberation” in 1975 by the Australian philosopher Peter Singer and “The case for Animal Rights” by Tom Regan in 1983. The decisive step towards the beginning of a global legislation on animal testing finally took place in 1992 after the special edition of “The principles of Humane Experimental Techniques” was published. This text elaborated on what is known as the principle of the 3 R´s (Replacement, Reduction, Refinement) for animal experimentation. This book has become the bedrock upon which the modern regulatory policies for the use of animals in experimentation have been built.

This article has been written by Santiago Mañosas Sánchez and Luis Serrano.